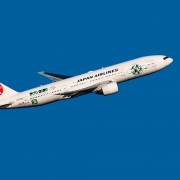 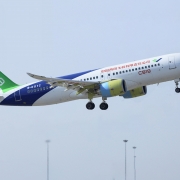 China has long been recognized as an engine for growth in the aviation industry.  Its airlines are rapidly expanding and demand for air travel continues to skyrocket, for both domestic and international trips.  Not wanting to cede the entirety of the increased demand for aircraft to Airbus and Boeing, the Chinese Government launched The Commercial Aircraft Corporation of China (COMAC) in 2008.  COMAC has since launched the C919, a 168 seat aircraft which looks to break the Airbus and Boeing duopoly.  The Chinese are not the first to attempt to break into the narrowbody passenger aircraft market.  Some have been successful, like Airbus with the launch of the A320 in the late 1980s, while others have failed, like the Dassault Mercure in the mid 1970s. While the C919 will likely not reach the heights of the A320, the aircraft has the potential to be carried to moderate success by the domestic Chinese market.

While the Boeing 737 aircraft may have the range advantage over the C919, an analysis of the schedule of Chinese operators reveals that the C919 is well suited to domestic Chinese operations. mba performed an analysis of all Chinese domestic routes currently operated by the 737-800 or A320-200 and flown at least weekly.  The results showed that the C919 would likely be able to serve all of these routes, assuming the aircraft is operated in its standard 168 seat configuration. Depending on the C919’s take-off performance, the aircraft would likely take a seat penalty at some of China’s higher elevation airports such as Ürümqi. Additionally, the C919 as well as the 737-800 and A320-200 cannot operate in cities such as Lhasa, which has an elevation of over 11,000 ft. Due to these observations, Chinese operators would most likely not be concerned about the C919’s range limitations. COMAC official literature states that the company will launch a C919ER, which will bring the aircraft’s performance closer to that of the 737-800 and increase COMAC’s presence in the market. However, no information has been released regarding the variant’s launch date or how COMAC will achieve the performance upgrade.

The C919’s suitability for Chinese operations is further explained by China’s unique geography for a country of its size. Nearly all of China’s population centers hug its east coast, while the western part of the country is mostly empty, save for a few large cities in the Xinjiang province in the northwest of the country.  There are also several other countries whose geographies are similar to China’s in this regard, which would allow the C919 to operate successfully. Brazil, India, and most countries in South East Asia would all be suitable markets for the aircraft, but major airlines in these regions have substantial orders for A320neos or 737 MAX 8s. This market saturation for narrowbody aircraft makes it unlikely that carriers in these regions will place C919 orders.

Another disadvantage the C919 has versus its western counterparts is that it has a maximum seating capacity of only 174 seats. The 737-800 and A320-200 currently have a maximum seating capacity of 189 seats.  This seating limitation will be less attractive to low-cost carriers, which operate narrowbody aircraft at maximum capacity. The ideal customer profile for the C919 is a Chinese full-service carrier, which is reflected in the type’s order book, from which Chinese low cost carriers Spring Airlines and Lucky Air are notably absent.

Potentially limited aftermarket support is another issue that may cause many non-Chinese operators to balk at purchasing the C919. It is unlikely that COMAC will be able to develop an efficient maintenance and spare parts distribution network for the aircraft.  Interjet, the sole North American operator of the Russian built Sukhoi Superjet, has had operational difficulties caused by Sukhoi’s similar supply chain issues. Engine maintenance delays have forced the grounding of several of Interjet’s Superjet aircraft, and some of the grounded aircraft are being cannibalized to keep the rest of the fleet flying.  Even though the Superjet’s sole engine option is a western built engine (the French built Safran PowerJet SaM146) the engine’s only application is the Superjet, limiting the amount of spares available. Should non-Chinese operators adopt the C919 they would likely face similar challenges as Interjet.  The C919’s saving grace in this area is that a large portion of the C919’s components are western built.  The APU is a Honeywell HGT750, and its engines, CFM LEAP-1C will likely have significant parts commonality with other CFM LEAP engines. However, this will probably not be enough to convince operators that maintenance can be completed on C919 aircraft in a timely and affordable manner.

Even if the C919 had performance figures equivalent to current generation Boeing and Airbus aircraft, it would still have a hard time securing any orders outside of its home market. Operators are often unwilling to be early adopters of an unproven manufacturer’s aircraft as seen in the order book for Russian built Irkut MC-21 and Sukhoi Superjet.  The MC-21 has performance figures much closer to the 737 MAX 8 than does the C919, but it has only managed to secure 205 orders, with Egyptian operator Cairo Aviation being the only customer outside of the Commonwealth of Independent States (CIS). Sukhoi has had similar challenges marketing the Superjet, with only two commercial operators of the aircraft (Mexico’s Interjet and Ireland’s CityJet) located outside of the CIS. Commercial challenges experienced by Russian manufacturers show that there is an uphill battle ahead for COMAC’s marketing team when they attempt to sell the C919 to non-Chinese operators. Granted, once all 205 MC-21 orders are filled, the aircraft will make up roughly 40% of all narrowbody aircraft operating for Russian airlines. Should the C919 achieve similar home market penetration, COMAC will receive around 1,000 orders for the aircraft.

Pricing of the C919 is difficult to pinpoint as no commercial terms have been agreed upon as of December 2017.  All orders currently consist of a “customer agreement” in which pricing and delivery schedules have not been discussed.  List price of the C919 has not been announced by the manufacturer although it is believed to be around $68.4 million.  If the same discount that manufacturers typically give to the A320-200 and 737-800 list prices is applied, the purchase price of a new C919 would be somewhere between $28.7 million and $32.1 million, placing the aircraft at around the same price as a new Embraer E-190. This pricing is a bargain for an aircraft of the C919’s size and the aircraft may win a few customers on price alone.  The Chinese Government is also likely to subsidize the purchase of the C919 for Chinese operators, increasing the likelihood Chinese airlines would select the aircraft over its western competitors.

On April 4th 2018, the Chinese government announced a 25% tariff on aircraft imported from the United States of America with an empty weight between 15,000 and 45,000 kilograms.  It is unknown how the Chinese will define empty weight, which is key to assessing the impact of the proposed tariff. The 737 MAX 8 has an operating empty weight of 45,070 kilograms, which would put it just above the tariff cut-off weight.  However, if the Chinese government defines empty weight as “manufacturer’s empty weight” which is the weight of solely the aircraft structure, the 737 MAX 8 will undoubtedly be subject to the proposed tariff. It is important to note that the tariff on aircraft is not likely to be implemented in the immediate future, but should it go into effect there would be significant consequences for both the Chinese and American aviation industries. The C919 would undoubtedly become more attractive to Chinese operators as the pricing versus the 737 MAX 8 would only become more competitive.  There are currently only 138 orders for the 737 MAX 8 from Chinese operators, but there are 1,079 737-800s currently operating in China that will need to be replaced at some point in the future.  Since Boeing would no longer be able to compete in this segment, COMAC and Airbus would undoubtedly look to fill this demand.  However, the 737-800 fleet in China is very young, with an average age of just under five years, so the tariffs would most likely be repealed once the fleet needs replacing in significant numbers.  The tariffs would also make it difficult in the short term for American operators to move used 737NGs, as the Chinese secondary market would effectively be blocked.  Should the tariff go into effect, both COMAC and Airbus could be winners, and the C919 program may get a much needed boost.

The C919 is a noble effort by the fledgling Chinese aviation industry. The aircraft is more than capable of serving Chinese airlines in their domestic operations, which is a sizeable and growing market. This combined with bargain pricing and Chinese government assistance may drive Chinese operators to the C919, cutting into a small yet noteworthy portion of both Boeing’s and Airbus’ Chinese business. Outside of China, the performance limitations of the aircraft will hinder the sale of the C919 and therefore COMAC does not currently pose a threat to the Boeing-Airbus duopoly. However, COMAC will certainly learn from its experience producing the C919 and will certainly produce more capable aircraft in the future. As a result, both Boeing and Airbus should take the Chinese aerospace industry seriously and implement strategies to counter their new competition.