You are here: Home1 / Airline Bankruptcy 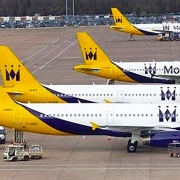 Monarch Airlines Limited (“Monarch”) sold its London Gatwick (“LGW”) slots to British Airways for an undisclosed amount on November 24th, reigniting the discussion on airline slot ownership within the aviation community. In order to understand how a bankrupt carrier without an AOC was able to monetize these assets, it is useful to review the court’s hearings on the matter.

Monarch is placed into administration

In the November 8th hearing, the panel concluded that Monarch’s operating license should be revoked. The Divisional Court concluded that Airport Coordination Limited (“ACL”), the party in charge of slot allocation at LGW and London Luton (“LTN”), was not under a duty to allocate Summer 2018 (“S18”) slots to Monarch because Monarch was no longer an operating airline. In its view:

Moreover, the Divisional Court had taken into account that Monarch had neither pilots nor aircraft at its disposal, resulting in “no more than a theoretical possibility that Monarch would resume air transport operations again”.

Monarch subsequently appealed the case, bringing it before the Court of Appeal.

At the Court of Appeal hearings, the representative for ACL argued that it would be a paradoxical outcome if a coordinator were to be ordered to allot slots after the licensing authority of the Member State had decided to revoke the applicant’s operating license. During the proceedings, the Court of Appeal sought to answer three central questions surrounding the case to determine its ruling:

The Court of Appeal concluded that Monarch was still an “air carrier” when slots fell to be allocated on 26 October 2017 and, in fact, remains one now. The following rationale was given:

On November 22nd the UK Court of Appeal affirmed the right of Monarch to S18 slots at LGW and LTN. By the court ruling, it can be determined that the current status, not the likelihood of future operation, should be taken into consideration at the time of slot allocation; but moreover there is no clear definition of an “air carrier” and “air transport undertaking” according to the Slots Regulation.