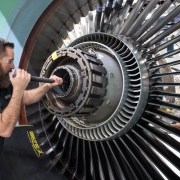 In order to raise capital, many airlines issue debt or secured bonds backed by their aircraft and engines, but most airlines are sitting on another underutilized form of collateral: spare parts.  Spare parts are a widely-accepted form of collateral, but few airlines have used this often appreciating asset-to-issue debt.

There have been few instances of aircraft spare parts being used as collateral for secured debt in recent years, highlighting the underutilization of spare parts.  mba has found only US$1.1bn of outstanding debt tied to spare parts that has been publicly listed, which pales in comparison to the tens of billions of dollars of outstanding debt tied to aircraft and engines.  This excludes credit facilities that were undrawn as of December 2016.  It also excludes any privately-held airlines where financial information is not publically available and parts debt issued by Republic totaling US$139.7mn due to Republic’s bankruptcy and subsequent removal from the NYSE.  Cash-rich airlines have paid down debt in recent years, so there may be limited need to issue new debt, however due to the cyclical nature of the aviation industry, the time will come when airlines will need to issue debt once again.

Part condition plays a major role in the value of a particular component.  Spare parts in aviation use a rather unique set of condition descriptions.  The most common part conditions are: New, As Removed, Serviceable, Unserviceable, and Overhauled.  When a part is removed from an aircraft during a part-out process, that part is considered to be in “as removed” condition.  These parts do not have the necessary paperwork that will allow them to be put into use in an operator’s fleet, and therefore are considered by the market to be less valuable.

In order for a part to be considered “serviceable,” spare parts must be accompanied by certifying documents, such as an FAA 8130-3 or EASA Form One, prior to installation on an aircraft.  The most cost-effective method to achieve this certification is for an authorized repair station to conduct what is known as a “bench-check” to confirm the serviceability of a particular component.  Components that are determined to be “unserviceable” must be repaired or overhauled in order to receive a certifying document.  Overhauled components are components that have been disassembled and returned as close as possible to new specifications, and therefore command a higher price in the market than components that are determined to be serviceable.

A market-based approach is typically used to value spare parts, as values for spares are more volatile than aircraft and engine values.  Data points from a year ago may not tell an accurate story of the Current Market Value of a particular part due to market variations, which may occur more rapidly on a supply and demand basis in the spare parts market than the aircraft market.  A current snapshot of the market for each individual part number needs to be obtained at the time of valuation.  Values may then be adjusted based on the market availability and component condition to reach a Current Market Value for each line item in the stated condition.  One way to value components is on an individual component basis which assumes that each part in a particular inventory will be sold individually with no time restrictions for the sale.  In order to determine the value of an inventory that needed to be sold in its entirety within a specified time period, an Orderly Liquidation Value or Forced Liquidation Value should be provided for a specific “lot” of components or an entire inventory, creating another valuation basis for an appraisal.

An aircraft or engine that is in high demand will naturally have spare parts that are in high demand, and will be priced accordingly.  However, unlike aircraft, spare parts do not necessarily depreciate over time.  Spare parts that service a particular aircraft will depreciate at first as the aircraft platform enters service and supply of parts is predominantly provided by the manufacturer of the components at what many would consider “list prices.”  Then, as the secondary parts market becomes more active, the market value of components will usually appreciate modestly until the remainder of the platform’s production life.  Once production of a particular aircraft is ceased and a considerable number of aircraft remain in service, the market value may begin to appreciate at an even greater rate as part scarcity starts to increase and demand remains constant.  This typically drives the entrance of part-out companies in greater numbers which acquire and disassemble aircraft to service this market. This leads to a period of stability in value before entering a period of volatility in which values are directly correlated to the supply and demand ratio for the specific component.  The following graph illustrates the life-cycle of spare parts value.

Spare parts trade rather easily on the secondary market, as there is always a demand for parts to keep in-service aircraft flying.  There are several platforms on which sellers can market their parts including several online services such as ILS and Parts Base, where sellers can post the parts they are looking to liquidate.  When monetizing inventories, sellers looking to maximize yield typically list their spare parts on the market individually, yielding the highest value over a long period.  Those who own larger inventories that require monetization in shorter periods of time may require a ‘lot sale.’  Lot sales have lower yields than selling each part individually, but they have higher sale rates and allow for the sale of parts in greater numbers.  Another option for part sales is auctioning, during which the seller packages entire spare part inventories for liquidation. This alternative often results in the fastest turnaround for sale on the market, but provides the lowest yield overall.

*Backed by a team of five ISTAT certified appraisers, mba’s trusted valuation team offers a wide range of valuation services, including the valuation of alternative collateral and spare parts as defined in this article. For more information or questions, please email valuations@redbook.aero.