You are here: Home1 / Bombardier 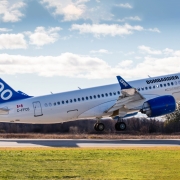 Airbus’ recent acquisition of Bombardier’s CSeries program has the potential to reinvigorate demand in the market for 100-150 seat aircraft.  While the CSeries is arguably the most capable aircraft of its size on the market today, Bombardier experienced marketing challenges, an effort further hamstrung by punitive tariffs levied on the CSeries by the United States Department of Commerce.

However, Airbus’ partial acquisition of the program will likely give the CSeries the marketing boost the program desperately needs and potentially allow the aircraft to evade the 300% import tariff by virtue of constructing aircraft destined for the United States in Airbus’ Mobile Alabama factory.  It has yet to be determined if Airbus will have success marketing the CSeries, but there are promising opportunities for the aircraft amidst the challenges.

Since the introduction of the 737NG, the market for 100-150 seat aircraft has seen a mix of successes and disappointments, with the smallest variants suffering the most in terms of orders. Airbus’s A318 and Boeing’s 737-600 failed to gain traction in the market, with only 129 orders received between the two. While Boeing’s 125 seat 717 was mildly more successful with 156 orders, the aircraft still fell far behind the 2,693 total orders received by the 737-700 and A319 at the top end of the 100-150 seat market.

However, even though the A319 and 737-700 make up nearly 80.0% of active fleet in this market segment, only 100 orders have been placed for the re-engined replacement aircraft. Furthermore, looking at the next generation of aircraft coming to the market, only 14.9% of orders will cover replacements for the 3,600+ 100-150 aircraft currently still in service. Even though the CSeries has outsold the MAX 7 and A319neo 7:1, there are significant opportunities for more orders from operators looking to replace aging fleets.

In addition to marketing opportunities, Airbus’s intervention may also help make the CSeries more affordable by reducing production costs.  While the CSeries offers competitive fuel burn advantages and performance capability, the high production costs hindered initial sales campaigns which did not allow Bombardier to market the aircraft at a competitive price, prior to the Delta deal.  Looking at the seat cost comparison in the chart below, the CS300 will likely be able to offer the lowest seat cost for small narrowbodies considering Boeing’s recent capacity increase to 172 on the 737 MAX 7 arguably causes the aircraft to fall out of this market segment.

Despite the optimistic possibilities the CSeries now has going for it, the question remains where and to who Airbus can sell the CSeries.  The largest operators of the 737-700, Southwest Airlines, and the A319, EasyJet, are both operators with exclusively 737 and A320 fleets, respectively, and unlikely to incorporate a new narrowbody type into their proven successful fleet models.  However, both aircraft types are popular with legacy and low-cost carriers alike and nearly 65.0% of the active A319 fleet, or nearly 900 aircraft, and 38.0% of the 737-700 fleet, or roughly 400 aircraft, are operating for airlines that have aircraft from multiple manufacturers. In addition, operators like JetBlue who currently operate regional jets but are looking for a more economical aircraft may find reason to switch to the CSeries aircraft as the program will be supported by the manufacturer of their remaining fleet.  If Airbus is able to successfully market the aircraft and maintain its majority market share of the sector, the manufacturer could be looking at sales of nearly 1,000 aircraft, breathing life into a previously struggling program.